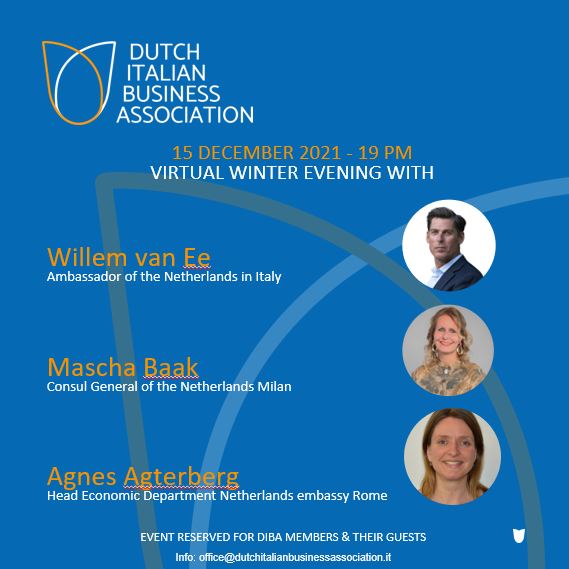 As most of you will know, quite some changes took place within the Dutch Embassy in Rome and Consulate General in Milan during the last months.

We are very pleased that the following Dutch diplomats, who arrived in Italy from various parts of the world, have accepted to speak during our upcoming event:

Ambassador Willem van Ee, who already served at the Dutch Embassy in Rome from 2000 to 2005 as Minister Plenipotentiary, Deputy Head of Mission and Head of the Political Department.

Mascha Baak, our new Consul General in Milan who arrived from Saudi Arabia, Riyad, where she was Deputy Head of Mission of the Embassy of the Kingdom of The Netherlands.

During the last DIBA event of 2021, which will take place on Wednesday 15 December and start at 19.00 hours, our speakers will introduce themselves and describe us their working experiences before they arrived in Italy and their future projects in this country. The discussions will have the form of an interview led by the DIBA Board. The members will have the opportunity to ask questions after the interviews. We thank the speakers very much for their availability during this busy period of the year.

The evening will be concluded with an on-line cocktail in the Zoom breakout rooms. The break-out rooms will close at 20.30 hours.

The evening is organized for members and their guests.

Each member may provide the name and e-mail address of a guest.         Please subscribe before Monday 13 December by sending an email to: office@dutchitalianbusinessassociation.it

We look forward to seeing you on 15 December!

The event is finished.